A history of Jews in Queensland

The first record of Jewish settlement in Queensland was around the same time as the colony of Queensland separated from New South Wales in 1859. Several Jewish families left Sydney to settle in Queensland and on Sunday 5 March 1865 the first communal meeting was held to start the establishment of a formal congregation and place of Jewish worship in Brisbane. At that time, Reverend Joseph E Myers was the first Minister and he established the first Hebrew school at Mrs Jewell’s residence in Tank Street in central Brisbane.

In 1865 Jonas Myer Myers, a cousin of Rev. Joseph Myers became the congregation’s second Minister and served Judaism in Brisbane for a total of 43 years. On 19th of March that year, the Brisbane Hebrew Congregation was properly formed in a temporary synagogue in Bulcock’s building in Queen Street, Brisbane.

In 1877, the congregation moved from the Synod Hall to the Masonic Temple in Ann Street in the centre of Brisbane. Finally, an allotment in Margaret Street was earmarked as the proposed site of the Brisbane Synagogue in 1885, with the foundation stone laid on July 7th of that year. One year later, on the 18th of July 1886, the Brisbane Synagogue building was completed and consecrated with great ceremonies and celebrations. 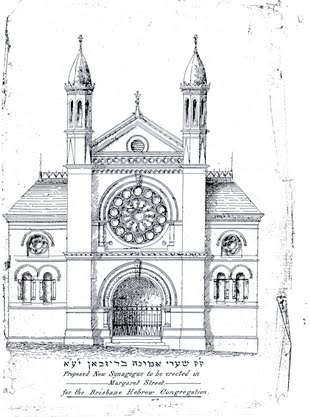 The archives of the Brisbane Hebrew Congregation reveal that in 1876 the community established a cemetery at Toowong.

For many years previously, the Jewish burial ground was on the corner of Lang Park (now Suncorp Stadium in Paddington).

The Jewish population of the State spread rapidly throughout Queensland in the late 1800s, settling in some of the most remote locations. A significant number of families lived in Toowoomba (north-west of Brisbane) for many years and formed a congregation with a synagogue. However, the community was not stable and families tended to leave as soon as they could afford to settle elsewhere. By around 1965, the synagogue had gone and only one Jewish family remained in Toowoomba. Similarly, in 1880 the records show that the rabbi travelled to other small communities around Queensland, even in Rockhampton (north of Brisbane).

1891-1895 were years of depression for Queensland and this severely affected the Jewish community with many members suffering financial difficulties.

General Hospital was attributed to non-kosher meat, the hospital board turned to the Jewish community for assistance. For several years, approximately 7,000 lbs of kosher meat was supplied to the hospital each month.

At the turn of the 20th Century, 23 Russian immigrant families arrived in Brisbane, many of whom were tradespeople. This was one of the many waves of Jewish migrants to the State. A community of Russian and Yiddish speaking migrants settled in South Brisbane, later forming the South Brisbane Hebrew Congregation (also known as Deshon Street (see photo below). Most of the migrants came from China and Russia. Their passage was often subsidised by the Australian Defence Department. At this time, the trip from China to Brisbane cost only £8.10 (equivalent of $16). 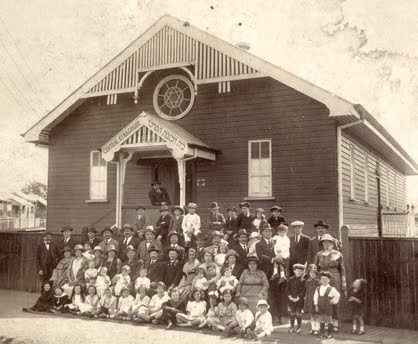 During the early 1990s, several organisations and groups were established, including the Queensland branches of the Zionist movement and the Jewish Workers Association, who produced several live theatre performances.

Throughout World War 1 (1914 – 1918), a number of the community enlisted in the various services, as recorded on a bronze plaque at the front of the Brisbane Synagogue. With the coming of peace, the steady migration from overseas was resumed. Just as Perth was the first Australian port-of-call for ships arriving from England, Palestine and Egypt, so too was Brisbane the first port for ships arriving from Asia. These ships brought Russian Jewish immigrants who had lived in Chinese towns such as Harbin, as well as those from Eastern European countries who made the journey via China. Many of the original families from these countries are still part of the community. Their arrival accounts for the Jewish population of Queensland doubling between 1911 and 1921.

The rise to power of Hitler’s Nazi Party in 1931 was viewed with great concern, and in March of that year a resolution protesting against attacks on Jewish people was publicised, followed by protest meetings.

Those Jewish people able to leave Germany, started arriving in Brisbane, first a few, then in their hundreds. These migrants were given housing or cash assistance, or employment in the community.

Japan’s entry into World War II (1939 – 1945) threw a grave shadow over the population of Queensland. In a series of lightening strikes, the Japanese were suddenly within a few minutes flying time of Queensland cities. The Government urged the evacuation of all children from the cities, particularly Brisbane, which, it was feared, could soon be attacked from the air. Thousands of children were sent south or to the comparative safety of country towns.

The Brisbane Jewish community too heeded this warning and evacuated most of its children. A large group was sent to Oakey, outside of Toowoomba, where two adjoining houses served as a hostel.

Local arrangements were made for the supply of kosher meat and other food was sent from Brisbane, until an out-break of scarlet fever prompted parents to withdraw their children and bring them back to Brisbane.

This war transformed Brisbane. The formerly quiet community now found itself in the path of American Pacific war efforts. About one million US servicemen passed through Brisbane and many were Jewish. Almost all the Jewish servicemen contacted the community, some married local girls, and took them back to the United States, while some settled here. 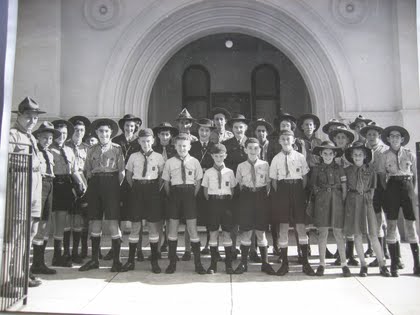 Right: The Judean Scout and Guide movement was very popular in Brisbane (c1945).

After the war, the Brisbane Synagogue went through a period of reconstruction with a mikvah and school added. The Bat Mitzvah ceremony was revived in 1948 and today every girl in the congregation who wishes receives a Bat Mitzvah.

Following the war, the Queensland Association of Jewish Ex-servicemen and Women (QAJEX) was founded. Although the ranks are becoming thinner each year, the association is viewed as being of great importance to the community.

It was about this time that the Judean Sports Club became Queensland Maccabi and joined the national body, the Australian Maccabi Federation.

Following Word War II, the Migrants’ Welfare Society carried out important work welcoming migrants and helping them to settle, a large home was used to house them until suitable accommodation could be found. Various other Jewish organisations were established from the 1950s onwards.

In August 1961, the synagogue of the Gold Coast Hebrew Congregation was established. This provided services for the residents of Surfers Paradise and the hundreds of Jewish people who visited the area on their holidays.

In 1976, the South Brisbane Synagogue (building featured in photo above) was mysteriously destroyed by fire and being made of wood burned easily. A new synagogue was later built of brick on a hill, where it is safe from flood and fire.

In the late 1960s a funeral chapel was built for the Chevra Kadisha in the Jewish cemetery at Mt Gravatt. The Cemetery contains memorials to the victims of the Holocaust where a Martyrs’ memorial was erected.

Temple Shalom, a reform temple, (now known as Beit Knesset Shalom) was established in Brisbane in 1972, with a Gold Coast temple being established at the same time.

A great flood on Australia Day 1974 covered all the low-lying areas of Brisbane, Ipswich and the Gold Coast, destroying or damaging homes or businesses owned by many Jewish families.

Water reached a point 30 yards from the Brisbane Synagogue, while the sefer torah had to be rescued from the South Brisbane synagogue using a rowing boat.

In 1976, an ambitious step forward saw the launch of the Jewish Communal Centre project at Burbank on Brisbane’s south-side. The Communal Centre comprises more than twelve acres of land with swimming pools and various facilities and amenities. This has been the focus of many communal functions and a popular venue for social, cultural and sporting events. In 1989, Queensland’s first Jewish day school, Sinai College, was established on the Centre’s grounds. The school has classes from pre-school to Year 7. The college also set up a campus on the Gold Coast. This was later taken over by King Solomon College which operated until 2007/8 when its closed and its children started attending Sinai College in Brisbane.

1988 saw the establishment of Gan Gani Jewish Kindergarten at Fig Tree Pocket in Brisbane’s western suburbs which has provided valuable Jewish education to the young.

Since the late 1980s, Queensland Jewry, in Brisbane and the Gold Coast, was bolstered by migrants from Sydney and Melbourne, many of them middle aged or elderly who retired from the southern States.

A number also arrived from the United Kingdom, Israel, the USA, and South Africa, many of these professionals, academics or tradespeople.

A new synagogue was formed on the Gold Coast. Surfers Central Synagogue was established in 2002 by 17 founding members, however it closed in 2007 due to the end of its lease in the building the congregation was renting.

In January 2007, the Brisbane Progressive Jewish Congregation was formed and in 2008, Cantor David Bentley was appointed as its Minister of Religion.